CONGRATULATE OUR SAVE A LIFE AWARD RECIPIENTS (PART 1) 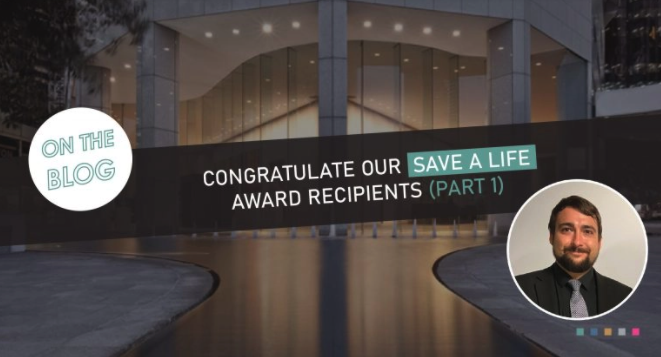 Security officers are often the first responders in a diverse range of emergency situations. Their first-aid capabilities and ability to effectively respond take dedication and training. Since 2010, the Australian Security Medals Foundation Inc. (ASMF) has been honouring exceptional individuals in the security industry through several awards designed to acknowledge their contribution to the community. Partnering with St John Ambulance Australia, the ‘Save a Life Award’ recognises security officers that have been faced with making critical decisions or taking action to save a life. The award provides a way for the community to support those who demonstrate the very best in security professionalism.

On Wednesday 27th October 2021, ASMF announced the 2021 recipients, and we would like to congratulate Daniel MacRae (123 Eagle Street, Brisbane) and Sekone Ioane (Westfield Mt Druitt) for their successful nominations. Today we bring you Daniel MacRae’s story and next week we will bring you Sekone Ioane’s. Both stories reflect the care and empathy taken by both Daniel and Ioane as they responded to critical incidents with bravery.

Daniel was nominated for two onsite incidents. The first involved assisting a gentleman that was complaining of chest pains and had a history of heart attacks and strokes. Assisted by Sandeep Kaur, the gentleman experienced a seizure and at one point stopped breathing with CPR administered. Daniel connected the AED, placing the pads in the required locations, and commenced analysis, monitoring the gentleman’s pulse – luckily no shocks were required, and the gentleman was stabilised on the arrival of the Queensland Ambulance Service.

Daniel also assisted a distraught woman that was experiencing a breakdown due to a pre-existing mental illness. Daniel worked with the woman to prevent her from hurting herself until emergency services arrived.

A bit more about Daniel MacRae

Daniel has a can-do attitude and is always willing to assist others where possible. He is energetic and proactive when it comes to his performance at work. He displays excellent attention to detail; he has recently stepped up into a leadership role on-site and is developing well. Daniel is always looking at the brighter side of situations.

He has respect from his peers for his ability to perform in his role, he is liked by everyone who works alongside him. Daniel is a team player who can take control when dealing with serious situations. Daniel is new to managerial roles and as such, he is learning techniques and styles in handling work and staff. He is showing promise and with guidance and focus, he will excel in this role.

We frequently release internal blogs and industry articles for our customers and staff.

Thank you! Your submission has been received!
Oops! Something went wrong while submitting the form.